Here is another american publication of the book, this time published in 2001 by Dalmatian Press, Tennesee. 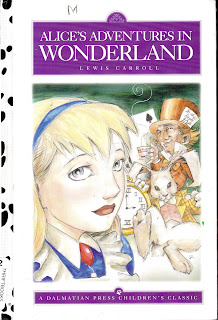 It was illustrated by Jason Alexander, who is also quite famous as comic artist. He illustated  for example Abe Sapien: The Drowning for Dark Horse, DC´s Gotham Central and stuff for Poison Elves. He did a quite half-assed job here, concerning his talent. When you look at some of the weird poses and thewonky anatomy, you get the feeling he didn´t cared much for this job. Howwver, lets look at his takes on Alices sizechanges: 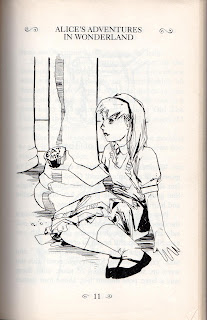 Tiny Alice in the Hall of doors about to eat the "EAT ME" cake.Her left leg really looks weird here. 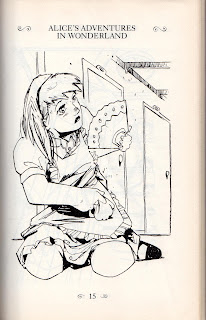 Now she is large and her right arm looks off. I mean really, this guy IS a good artist, why does he keep on screwing up the limbs like that? 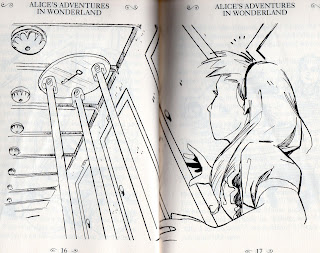 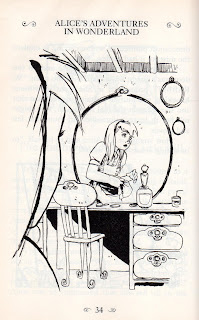 Now we´re in the White Rabbits house Alice is about to hit the bottle again... 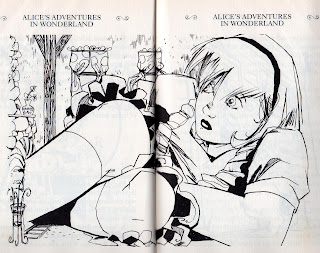 Another nice splashpage, but again her arms and legs look so fat! I think I might have an ide why he was doing that. As a comicartist he was so used to drawing sexy young women that he was not used to drawing children. He was allready starting to draw Alice like a young woman (you can see that by the face which looks way too old for a 7 year old girl) when he stopped himself at her arms and legs, because thats when he noticed that he drew them way to slender and shapey. So he made them much thicker because everybody knows kids have chubby short arms and legs. Results may vary, but who cares? This book is for kids and they have not only chubby short arms and legs but are also morons who dont see that whe didn´t care for this job. 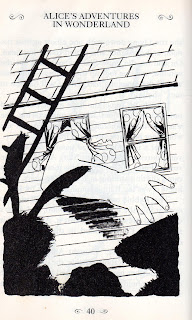 Just look at the arm, you can see that he first drew it much more slender and then overdrew it! 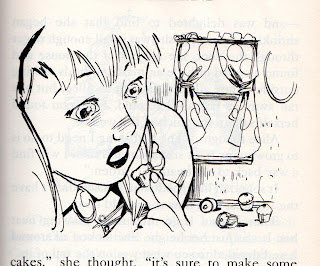 Not much to say here, Alice is about to eat the cake that will shrink her out of the white rabbits house. 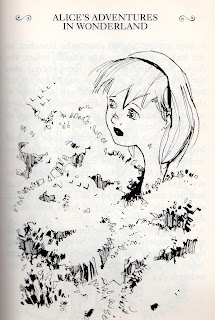 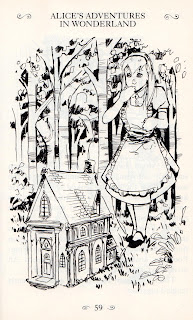 This one here is pretty nice since its IMHO no made often enough. Alice approaches the house of the Ugly Duchess and notices that she is much too big for it. Even Alices proportions look nice here. 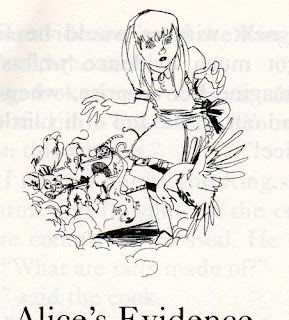 At the court: Alice trows over the jury. 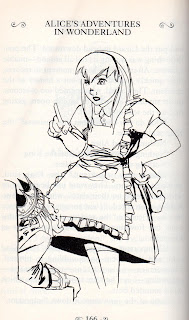 Alice is giving her evidence. Somthing about the way she stands looks very off, but I can´t quite put my finger on it... 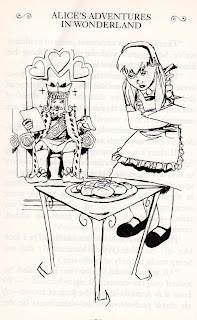 More from the court with another odd pose from Alice. She looks like her stomache hurts. 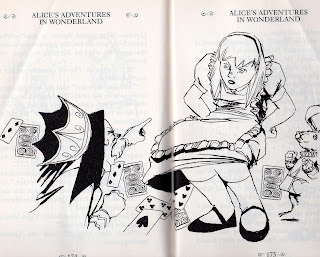 Last splashpage in that book. Alice has another strabnge pose, but whats wrong with her dress? Something is seriously wrong here. Just look how it billows tio her right side for some unexplainable reason while beeing skintight on the left.
Alli in all a okay version. There are many illustrations in it, but they are all not very good. It all looks rushed and sketchy. Oh well, next up is a VERY good comic version..
Eingestellt von spartakus um 15:24